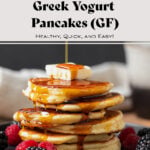 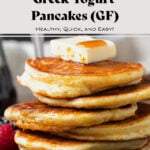 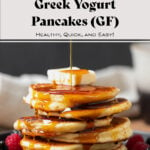 These Healthy Greek Yogurt Pancakes are the fluffiest and softest pancakes ever! They're made with gluten-free flour, greek yogurt, and whipped egg whites.

What makes these pancakes special?

These pancakes are similar to souffle pancakes in that they're incredibly fluffy and soft. They're made with whipped egg whites which gives them a soft texture.

The main two ingredients here are greek yogurt and eggs. There's only a little bit of gluten-free flour and no sugar. This makes these pancakes sugar-free and keto!

You can add a little coconut sugar if you'd like but I like to keep them sugar-free and add maple syrup on top. This way you know exactly how much sweetener you're adding.

These are definitely my favorite pancakes to make!

You only need 6 ingredients, all of which you probably already have! It takes about 30 minutes from start to finish to make these and the results are totally worth it!

How to whip egg whites perfectly every time?

Make sure the bowl and your mixer are clean and dry. Any oil or egg yolk will hinder the process and your egg whites won't whip properly.

Do I need cream of Tartar to whip eggs?

No. Some people add salt, sugar, and cream of Tartar but eggs will whip on their own too without a problem. I only add a little bit of fine sea salt.

How do you know when the egg whites are whipped?

You know they are whipped well when there are stiff peaks when you take out the beaters.

How do you fold the egg whites into the batter?

Folding egg whites mean stirring it in by lifting and folding the batter over the egg whites until they're incorporated. Be gentle, if you stir it too much, the egg whites will deflate and turn watery.

There are egg white lumps in the batter, is that ok?

Yes. It's ok if there are a few lumps of whipped egg whites here and there. It's better than over-mixing it.

The recipe calls for four eggs but you only use 2 egg yolks. Save the remaining two for another recipe or just add them to your omelet!