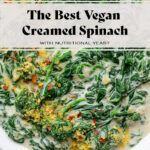 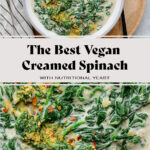 This Vegan Creamed Spinach is the perfect side for when you're looking for a lighter but just as delicious version of that classic creamy spinach we all know. The secret is cashew milk and nutritional yeast. So good and creamy, you wouldn't believe it's dairy-free!

Spinach - I'm using baby spinach because it's easier to find for me and it's less bitter than regular spinach but either work.

Onion and garlic - These two are sauteed with avocado oil and make up for a large portion of the flavor of the dish so I wouldn't skip them. Yellow onion works the best.

Nutritional yeast - There really isn't anything this could be substituted with aside from actual cheese. It adds a specific cheesiness and umami flavor to the dish that can't be replicated. I also add a splash of tamari to add even more umami and saltiness but that can be skipped.

Tapioca starch - I mix one teaspoon with water and mix it into the milk in the pan. The milk will thicken slightly on its own, the tapioca starch makes it better but can be omitted. You can also use arrowroot or corn starch.

There are a couple of different ways you can go about making this dish.

You can use either fresh or frozen spinach. If you use fresh, I highly recommend blanching it. That means you'll briefly cook it for less than a minute and immediately transfer it into an ice bath. This helps the spinach to stay vibrant and it gets rid off a lot of the liquid that would water down your creamed spinach.

Step One: Wash your baby spinach and set it aside. Prepare a large bow filled with ice and water. Bring a pot of water to boil over medium-high heat. Cook the spinach either all at once or in batches, there's a lot of it but it will cook down a lot.

Step Two: Transfer the blanched spinach into the ice bath to cool down for about half a minute.

Step Three: Squeeze as much liquid as you can out of the spinach. This step is important, if you don't do it, your creamed spinach might be too watery.

Step Four: Sautee chopped onion with avocado oil for a few minutes. Add the minced garlic for the last minute.

Step Six: Mix the tapioca starch with a splash of water and whisk it into the sauce.

Step Seven: Add the spinach. If you're using frozen, make sure it's defrosted and you squeezed out as much liquid as possible.

Step Eight: Mix it all together well and add more chili flakes, nutritional yeast, salt or pepper to taste.

What to Serve It With

Creamed spinach is a very mild side dish so it pairs really well with dishes that use lots of spices. It can work the same way as adding sour cream, cream, or milk to anything really spicy.

The cooked spinach keeps in an airtight container in the fridge for 2-3 days. Wait for it to cool down completely before storing. I do this to avoid the milk going sour when you close it off while it's still hot.

How to reheat the spinach - Transfer the spinach to a small pot or saucepan and warm it up on the stove over medium heat. Stir it frequently and don't bring the heat up too much, it could burn easily and could splash a lot once it starts boiling too strongly. You can add a splash of milk or water if there's not enough liquid to warm it up.

How do you make creamed spinach less bitter?

By blanching the spinach. This gets rid of the oxalic acid which causes bitterness.

Do you have to blanch spinach for creamed spinach?

No, but I highly recommend it. You need a very large amount of spinach so it makes it easier if you blanch it before mixing it with the milk. When you don't blanch it, the result will be more watery and you won't get rid of any bitterness.

Yes, boiling spinach or any vegetables can get rid of a large portion of oxalic acid. This will help get rid of that weird gritty feel on your teeth when you chew spinach which is caused by the oxalic acid crystals.

Is eating raw spinach bad for you?

The short answer is no, it's not. Most people don't consume enough spinach so eating 1-2 cups of raw spinach a day is ok for most. Spinach unfortunately contains the highest amount of oxalic acid of all greens. Consuming very large amounts could limit calcium absorption and could lead to the formation of calcium-oxalate, which can cause kidney stones. This is just my opinion and shouldn't be taken as advice, always consult a doctor if you have any questions.

Can I use frozen spinach?

Yes, totally! Just make sure you thaw it completely before using and squeeze out as much liquid as possible.

What goes well with spinach?

Raw spinach is great for salads and so many other dishes. Creamed spinach has a very mild flavor so it goes well with anything spicy. I like to serve it with chana masala and rice. It's also great with salmon, chicken, or to keep it vegan, crispy spicy tofu. It's great with any spicy stews, or curries too.

A dairy-free version of the classic creamy spinach side dish. No dairy, easy to make, and so delicious!