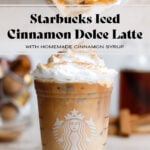 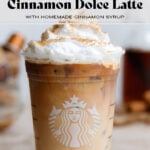 To make the syrup, add your sweetener of choice (I used cane sugar), water, and two cinnamon sticks to a small saucepan. Bring those to a simmer stirring constantly until the sugar dissolves. Simmer for 5 minutes and let it sit for 10 minutes or until it cools down completely. The cinnamon will keep infusing into the syrup as it sits and cools. Transfer to a jar or a bottle and store in the fridge for up to two weeks.

When you're ready to make the latte, fill up a tall glass with ice (I used a 16 oz Starbucks cup in the photos) and brew two espresso shots. Pour the espresso over the ice, add a splash of the cinnamon syrup, and a good splash of oat milk (I usually add ¼-1/2 cup).

To finish, add some whipped cream on top (I used coconut milk whipped cream) and sprinkle with turbinado sugar and cinnamon to add even more cinnamon flavor to the drink. I like mixing the sugar with a pinch of cinnamon in a small bowl. You can make a bigger batch of it to have it always on hand.

The latte is best served right away because of the ice and the whipped cream on top. You can store the syrup in the fridge for up to 2 weeks and the cinnamon sprinkle in your pantry for months (as you would the cinnamon and sugar separately).

Can I use ground cinnamon instead of cinnamon sticks?

Technically yes but I highly recommend whole cinnamon sticks. Ground cinnamon will settle at the bottom of the syrup and the syrup won't be as good.

How long does the syrup last?

If stored properly in the fridge in an airtight container, it will last for 2 weeks. You can add 1 teaspoon of vodka to the syrup to preserve it and make it last longer.

What's Cinnamon Dolce Latte from Starbucks made with?

Can I use cold-brew or drip coffee instead?

Yes, you just have to adjust the amount. Espresso is stronger so you need less of it than you would cold-brew or drip coffee.

I'm a big fan of making my own homemade Starbucks drinks so there are always new ones being added to the site but below are 4 of my favorites! Check out the Starbucks Drinks category to see them all!

Cinnamon dolce sprinkle: You can use plain turbinado sugar but I like mixing it with some ground cinnamon to mimic Starbucks' Cinnamon Dolce sprinkle they add on top of the whipped cream.

Cinnamon syrup: Store in an airtight container in the fridge for up to 2 weeks.