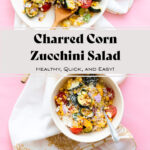 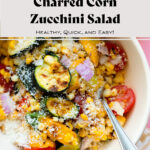 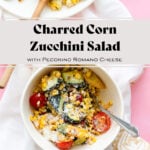 Whether you use a grill or your oven's broiler, this Charred Corn Salad is the perfect dish to use up all that amazing fresh summer produce!

Summer vegetables just taste so much better when they're in season and grilling them greatly enhances their flavor. So lets take advantage of this and make this tasty simple salad!

I got inspired to make this salad by my favorite two summer salads - the Greek Potato Salad with Feta and Olives and this awesome Mediterranean Orzo Salad. Making all three would make a great selection for a summer bbq or a garden party!

Grilling without a grill?

If you live in an apartment like me, you probably can't own a grill which makes this harder. What can you use instead? Use the broiler! It's not the same but it will do the trick and it requires no prep and no cleaning like the grill does. It's a win-win!

Grilling Vegetables With a Broiler FAQ

How to grill corn in the oven?

Use the broiler. Get rid of the husk, cut all the corn kernels off the cob and spread them on a baking sheet. Broil for a few minutes checking often. Be careful it can burn very quickly!

Can I grill a whole corn cob in the oven?

Always remove the husk as it could catch fire in the oven with the broiler on. You can grill the corn cob whole but you'd need to turn it often otherwise it will just burn on one side.

How to grill zucchini in the oven?

Italian Pecorino cheese is made with lamb rennet which means it is NOT vegetarian. The same goes for Parmigiano Reggiano, it's also made with animal rennet. There are however vegetarian versions on the market. If you want to keep the dish vegetarian, make sure to always check the package.

Easy, quick corn and zucchini salad you can make either on the grill or in the oven. Perfect for the summer!

Grilling the corn and zucchini on a grill: Grill the corn whole and then chop the kernels off. For the zucchini, chop off the ends, cut it in half lengthwise and grill on both sides, and then chop.