Stuffing my mouth with pak choy has recently become a new hobby of mine.

No, but really it's SO delicious! Sauteed pak choy is extraordinary and I'm not exaggerating. Well, maybe a little, but it's definitely tasty and worth trying if you never have!

What is pak choy exactly? Don't you mean bok choy?

Funny story — when I bought pak choy a couple weeks back for the first time I was under the impression it was bok choy and I was actually going to call this recipe "Sauteed bok choy and brussels sprouts with eggs" until I decided to google it and found out that it's in fact called pak choy and that bok choy looks a lot different. I mean, before that, I once googled the difference between bok choy and pak choy but didn't pay too much attention to it and thought they were exactly the same but they're quite different although both fall into the "Chinese cabbage" category — it's a cruciferous vegetable.

There are two pak choys (? or two pieces of pak choy? What is the right option?) in this recipe and the meal would turn out different if you added two bok choys (? again) instead because they're like two times the size! The main difference between the two varieties is that bok choy has white stems and darker leaves and Pak Choy is overall green, but lighter and also much smaller.

Let's stay with Pak Choy. It has a decent amount of vitamin A and C, although those are most likely destroyed while cooking. It's also a nice source of calcium, iron, and magnesium. It has minimum calories, virtually no fat, mainly carbs and protein (it's obviously not as good of a source of protein as other plants but every gram counts, right?). Speaking of protein there're two eggs for each person which is a good protein source on itself. For this recipe, I made them sunny side up, although lately I've been making them over easy/medium because I'm not into the raw yolk so much anymore. If I were making this for breakfast I'd definitely do the eggs over medium but for the sake of the photos, I made them sunny side up simply because eggs over medium aren't this good looking.

If you're a vegan, you can skip the eggs and add anything else you like. This dish would be delicious for lunch or dinner with some rice, quinoa, and a mix of other fresh veggies. I love the brussels sprouts and pak choy combo with a sneaky addition of spinach to add even more green goodness to the meal! I topped the whole thing with sundried tomatoes (in extra virgin olive oil) to add a different flavor to it, but that's optional so don't worry if you don't have those on hand.

This really is the best savory breakfast I've had in a long time (probably since my visit to NY in December—Hu Kitchen, I miss you—quick shout out to my Where to Eat in New York? post in case you're in the area looking for food)

I hope you enjoy this deliciousness as much as I do! If you make it, don't forget to let me know how you liked it. :) 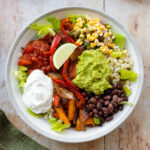